Hello there! We hope this finds you well and enjoying the warmer months - if we must ;-) Please know we are closed for the Off-Season and Summer Event Rentals. Snow Trails typical Winter season runs December through mid-March. Bonus Weekends possible early and late season. We'll look forward to great times ahead with you for our 60th Winter Season in 2020-'21!
Office Hours: By Appointment>> Please Contact Us

GET TO KNOW SNOW TRAILS

Skiing in Ohio really got its start in 1961 when Snow Trails opened its slopes to enthusiastic skiers. Mansfielder's themselves were unprepared for the throngs of visitors on the snowy weekends that followed. Cars with ski racks soon became a familiar sight on the highways around the North Central Ohio area. Many thousands of Ohioans, as well as skiers from neighboring states such as Kentucky, Indiana, and West Virginia, have come to know Mansfield as the "Ski Capital of Ohio."

Before 1961, the State had several hundred skiers and even a make-shift rope tow or two operated by private individuals or ski clubs, not for the general public. Ohio winters, up to this time, were not considered favorable for commercial skiing enterprise.

There were hundreds of ski areas operating in the northern states, but no one had developed one as far south as Ohio. Those interested in the sport had to travel to Canada, Michigan, Upper New York, or northern Pennsylvania to find the nearest ski hill. 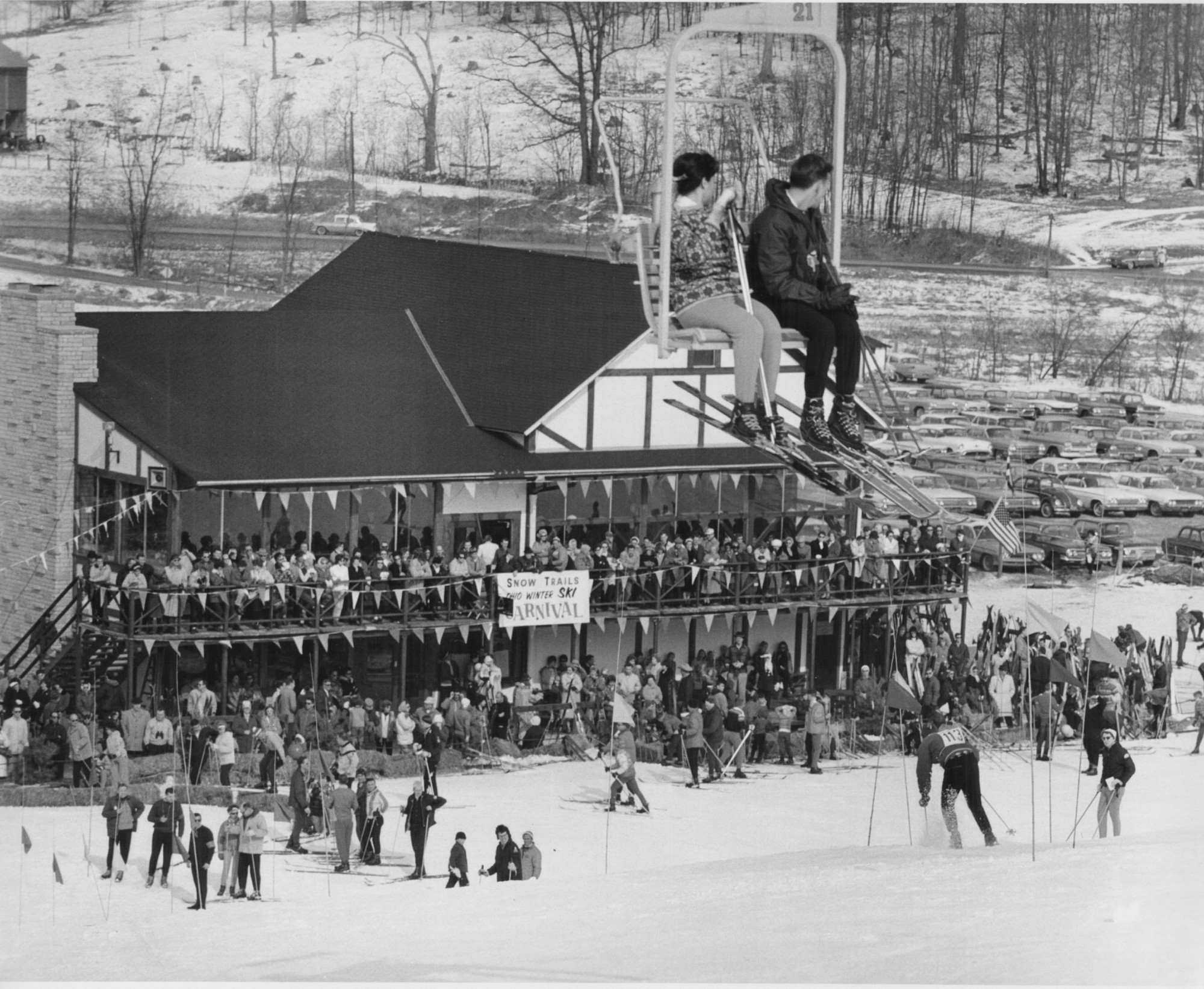 It wasn't just luck that made Snow Trails a resounding success. Before a tree was removed or a spade full of earth turned, climatological data and geological survey maps were closely scrutinized. The task was to select the best possible location for developing a ski slope that could be maintained by the use of snowmaking technology.

For man-made snow, average temperatures need to be in the freezing range and sufficient temperatures in the low twenties had to be available in order to make adequate snow to cover the acres of slopes. Natural snow in Ohio is neither sufficient nor dependable for winter sports.

What is man-made snow? It is simply the product of water and air combined in a special machine at the proper temperatures. The machine creates a fine mist which, in cold dry air, crystallizes as it falls to the ground and forms a snow-like granular cover.

The first ski area to try snowmaking was the Concord Hotel Resort in New York's Catskill Mountains. It was 1951 when they first turned on their new equipment set up on a slope on their golf course. Today, all eastern and mid-western ski resorts, and even those in the Sierra's and the Rocky Mountains, depend on machine-made snow. 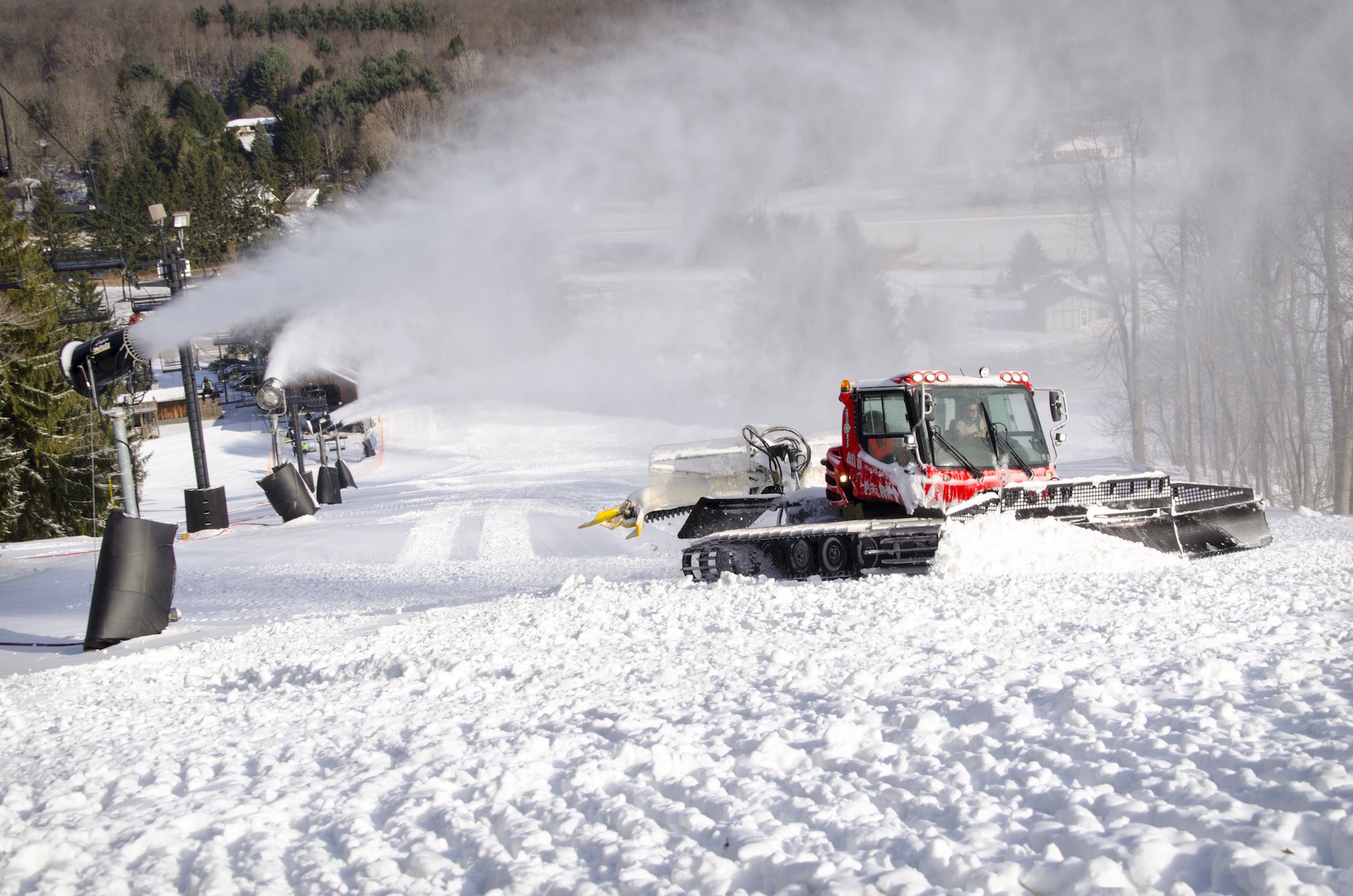 Snowmaking is expensive. Over a million dollars is required for the necessary equipment; a larger sized ski development requires several million dollars for snowmaking outlay alone. Special high-powered snow machines and millions of gallons of water are required to provide enough capacity to cover an average hill.

The art of snow making and grooming the slopes for skiing is constantly improving and Snow Trails has historically been at the forefront in adapting to the latest and best technology.

Snow Trails is known for superior skiing conditions and for being open longer than other ski areas in the region. 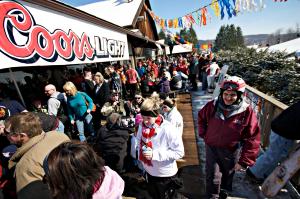 Before Snow Trails could be converted from a dream into reality, other problems had to be solved too. In 1960, skiing was a relatively new sport to Ohio. What would the skiers want in the way of rental equipment, food, skiing instruction, ski lifts and lodge facilities? All these questions were taken into consideration when Snow Trails' developers laid out Ohio's first ski area near Mansfield.

There have been a number of ventures that were not successful in Ohio such as Sugarcreek in Bellbrook near Dayton.  Echo Hills near Lancaster closed in 1991 after about ten off and on years. The latest was Spicy Run in southern Ohio that opened in 1997 and, after three disappointing seasons, closed in 2001.

Additional slopes were opened at Snow Trails and a double chair lift was installed and operated, for the first time in Ohio, on December 8, 1962. This represented another innovation for the Ohio ski scene. There were relatively few chair lifts in operation in the United States and it was almost unheard of for a ski resort the size of Snow Trails. Skiers began arriving from Louisville, Kentucky; Indianapolis, Indiana; Wheeling, West Virginia; and other distant points to ski at Snow Trails. One of Ohio's coldest and whitest winters added to the growing interest in the sport.

Where will it all end? According to Dave Carto, the skier/snowboarding population is still growing. "Man-made snow has brought skiing to major metropolitan areas and, with its obvious combination of healthful outdoor recreation, improved safety, and style, it has become a prominent wintertime leisure activity."

In 2006 a tubing park was opened to meet the growing success of these facilities at ski areas throughout the country. The importance of being able to provide reliable snow is the key to success for tubing as well as skiing operations.

Snow Trails, as Ohio's first commercial ski resort, has maintained its reputation for leadership. Being "first" has become a tradition as well as a challenge. Just for the record, here is a list of the most significant "firsts:"

SNOW!
Snow Inspired. Second to none.
We believe you can never have enough of a good thing. Especially, when it's snow! Snow Trails not only has the top-of-the-line snow guns to blanket the slopes, but the talent and expertise to groom it to perfection.

Comfortable Capacity: 2,600
This is the number of skiers that can be accommodated comfortably at one time without crowding or long lift lines.

Length of Season:
86 day average based on past five seasons.

Snowmaking Capacity: 4,400 gallons per minute, which equates to 264,000 gallons of water per hour delivered through 3+ miles of 4" to 16" welded steel underground pipe. Capable of covering almost three average slopes (6 acres) with 4" of man-made snow base in 24 hours at full capacity with an average temperature of 25 degrees and less than 65% relative humidity.

Hello there! We hope this finds you well and enjoying the warmer months - if we must ;-) Please know we are closed for the Off-Season and Summer Event Rentals. Snow Trails typical Winter season runs December through mid-March. Bonus Weekends possible early and late season. We'll look forward to great times ahead with you for our 60th Winter Season in 2020-'21!
Office Hours: By Appointment>> Please Contact Us